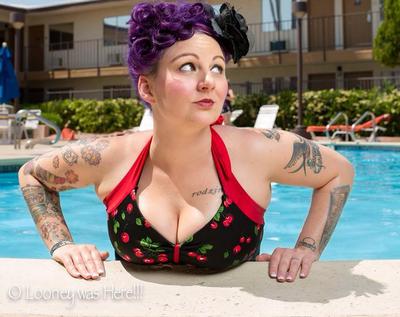 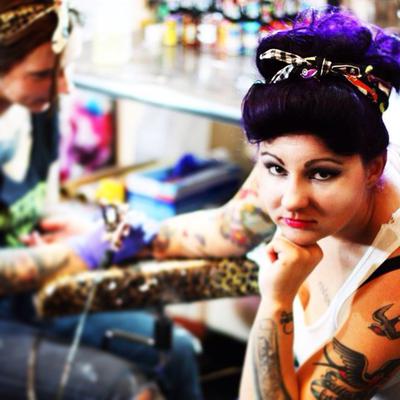 Tattoo Shoot for a local company 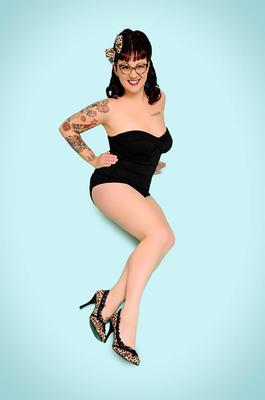 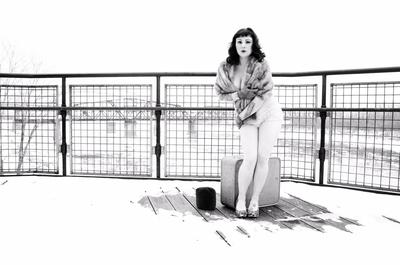 Sophie is an adorable mix of sexy sass, sometimes described as having the tenacity of a Doberman. Whether she is posing in front of a camera with a cheesecake smile in retro pinup fashion or performing on stage, she will dazzle you with her personality and curves.

For over a year as a spokesperson for the 39th St West business corridor she was out on the street every 3rd Friday meeting people and promoting the local businesses and events with maps, retro photo ops, stickers and other promotional unmentionables.

Sophie has been practicing the art of Burlesque in Kansas City for the past 6 years.  While perfecting her BurlyQ craft she began to produce shows of her own.   As she evolved from performer to producer she booked shows at Uptown Arts Bar of Kansas City, Club 906 in Liberty, Ambassador Sign Co. Excelsior Springs and soon Joplin.  With a variety of stage numbers that she has creatively choreographed for herself plus numbers created for entire casts, the shows are each uniquely entertaining.  Her network of talent is vast and diverse including a multitude of burlesque performers, musicians, aerial performers, clowns, jugglers, flow, hoop and fire performers.

In 2012 she produced Kansas City’s first annual Pinup Faire.  She offered venders of retro and vintage style swag a place to show off and share their wares together under one roof.  She chose local musicians and burlesque performers to round out a day of fun retro experiences.

Miss Sophie also created The Sassafras Situation, an internet radio show.   The show is a focus on local and worldwide burlesque, pinup, rockabilly and retro lifestyles.  She features local music along with her favorite burlesque tunes.  The show was the number was one rated show on SLAM for a number of months.

Sophie recently returned from Viva Las Vegas Rockabilly Weekend 17 where she represented Kansas City as a Pin Up Contest runner up. Sophie is focusing more on Pin Up Modeling. Viva Las Vegas inspired the Cheesecake Pin Up insider her.

When Sophie isn’t promoting or producing a show or event she spends quality time with her two mutts Ella Fitzgerald and Bing Crosby.  Ella is an eight year old competitive DockDog/Disc Dog that she has trained from a puppy.  Ella, a black Lab mix, competes in Big Air competitions where she jumps for distance from a dock into the water.  Her personal best is an amazing 24’ 3"  Bing is an adorable hairy-hairless shelter pup that needed a loving home.  He is learning the ways of the world through Sophie’s training, alongside Ella, champion companion.

Join in and write your own page! It's easy to do. How? Simply click here to return to Upload YOUR Best Pin Up Photo.